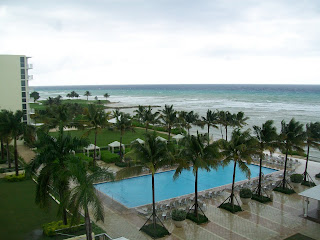 Ok so where do I begin?! Our plane ride was great, we were bumped up to first class because the agent said my daughter reminded her of her daughter and she was just so cute...thank you Imani! Jamaica was beautiful! We arrived in Montego Bay Thursday and came back to Colorado Sunday...super short trip. Coming from dry Colorado the humidity felt great! We were a little worried because Tomas was in the works, but luckily it had down graded from a hurricane to a tropical storm and its path was away from Jamaica. We had a nice taxi driver named Baba, he asked a lot of questions about Robin, if she was blinded at birth or diabetes...I told him neither, that she was misdiagnosed...he was saddened. It was strange because one of the security guards came up to my mom and asked her what had happened to Robin and that he thought it was so nice that we bring her out to do things...ummmm what are we supposed to do???? Leave her in a room somewhere because she can't see???? WEIRD!!!! Anyway...the mornings were a little rainy with a light breeze but the sky cleared up by noon. The feeling was very relaxed and laid back, it felt good to not have to rush to do anything, be anywhere or to adhere to a schedule. While Robin enjoyed laying out in the sun listening to her ipod, I ran around the water park trying to keep up with my 8 yr old. Imani, my daughter had a blast going down the water slide...not so much fun for me; I had to carry her tube up a winding staircase and then run back down to the bottom to see her come down; she had me do this about 6 times..the joys of being a mommy lol! We went on a tour of the Great House of Rose Hall, Imani was quite intrigued with the history and bought a book, I was shocked that she still wanted the book and read it although it didn't have any pictures. Not only was she intrigued with the story of the house, she was also intrigued by the many stray cats around...thank goodness I keep hand sanitizer on me at all times! The resort had a lot of amenities for children; Robin and I had a difficult time getting Imani out of the kid zone...we were held captive by her for HOURS!!!! Robin is such an awesome aunt, she played Nintendo car racing games with Imani and spent a loooooooong time singing karaoke while I read a book.

On our way back to Colorado we went through Miami and spent the day on the beach. Because of the weather in Jamaica and the high waters we didn't go out on the beach, so it was nice to enjoy the beach in Miami. We all ended up wet from getting hit by a high wave while getting out feet wet...we had a blast! Imani didn't want to leave! We chilled out on the beach and had a nice lunch. Robin shocked me because she is not a drinker but she drank some of my raspberry lemonade which had vodka in it, she actually liked it! She may be moving away from her virgin strawberry daiquiri lol!

Although it was a short trip, we had a great time! The view was beautiful and the experience was great!
Posted by Toni at 11/13/2010